Global variables are one of the lowest programming abstractions you can use today. They represent through a human readable name an arbitrary address of memory on the machine running a program. In the beginning, real programmers would store their data at specific memory address locations, and this was tedious and error prone. Being able to name those address locations with a meaningful name, hopefully indicating what the address was used for, decreased human errors and made reviewing code easier. Programmers didn't have to remember any more what the address &A0BFh stood for while developing. They weren't even called global variables, they were simply variables, saving the world and allowing civilization reach higher heights. They were good, and kittens were saved.

So what happened? At some point structured programming happened and suddenly programmers realised that as code grew, it was useful to compartmentalize sections and try to make them independent of each other for reuse. Local variables entered the scene, having a shorter lifespan compared to that of the immortal global variables. Now you could have subroutines using their own variables without polluting the global name space. Note how even the words I just used (polluting) imply something negative. As if the global name space was as precious as our bodily fluids, and any attack against them had to be answered with resolution. 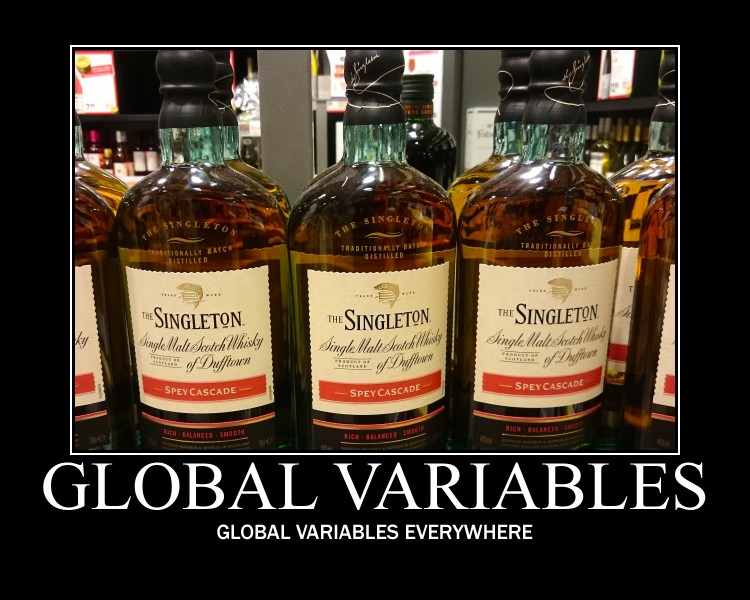 Indeed, global variables are at odds with structured programming (and even more concurrent programming). Consider the following C program:

This little program will display that there are 3 words in the text Globals, globals everywhere. This is done calling the count_words function, which then calls the libc strtok function to tokenize the input. That is, strtok splits the input buffer and loops over it ignoring the separator characters.

The function count_words stores into the global variable amount the number of words. And for this simple example it's enough, and it works. However, if we wanted to reuse the count_words function in other programs, we would quickly see that we have to carry the global variable along: the function itself is not independent. Also, it is difficult to call, rather than assigning the result to any variable, we are forced to use amount.

I picked this specific case for another reason. Let's say that we make count_words not use the global variable amount but instead return the value. Then we write some sort of word indexing website as an experiment and we modify the program to read multiple input files and start different threads, each calling the count_words subroutine. Excellent! We are done, aren't we?

Nope. Here we see another evilness of global variables. The libc strtok function itself uses an internal global buffer (similar to the amount global variable) for its purposes, and this means that concurrent threads calling this function at the same time will step over each other modifying this buffer, and likely obtaining an incorrect result during the computation. For this specific reason the strtok_r function was added. Through the use of a new third parameter, the caller of the function can specify the internal buffer, and thus multiple concurrent threads using different buffers won't step on each other. This property is called reentrancy, and it tells the programmer that it is safe to call a function in a multi threaded context because it doesn't use any global state.

The crusade against global variables 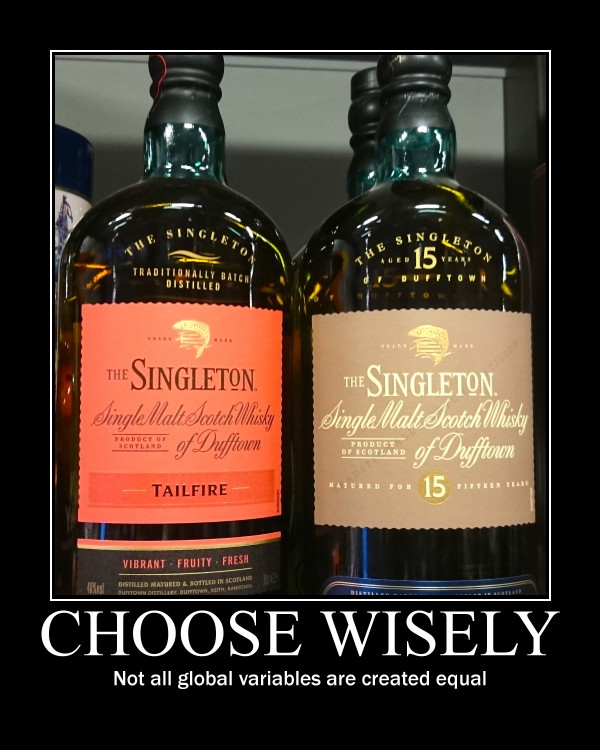 The solution to all this suffering is easy. Ban global variables. Banish the strtok function from the standard C library. Even better! Why don't we make a programming language were the programmer has to jump through hoops to make a global variable? That will teach them, if programmers really want to have a global variable, let's force them to wrap that around an invented object class and mark it static.

Even better, rather than create global variables, why don't we have a language where the mainstream convention is to wrap them inside the singleton pattern? Oh, don't worry, it's going to be simple, so simple in fact that to this day there are still questions on how to implement this pattern because it is so complex and it has so many little gotchas that nobody is able to figure out the proper way to do it. I'm not the first to point out that people who are new to programming get bored to death through the use of languages which require them to be an expert to implement a Hello World program.

At this point you really have to stop. Where did it go wrong? Why from a simple global variable we have to over engineer a singleton pattern? Is it really that good? Is it that common to start writing an algorithm using a global variable that you later say "Awww, look, I should have not used that global variable because I have to now… add a single state parameter/structure to my code"? The amount of times I've said that are very very few, yet day and night I find myself reading the singleton pattern where a normal global variable access would do.

Global state is rarely a matter of a single variable, and one typical solution is to group the global state into a single structure. Then create an global variable of that structure and use it. Here's a snippet from one of my programs implemented in Nim:

Command line parsing is a very good example of global state because it happens once, and it works for the whole execution of the program. When the user wants to have a verbose execution you can store that in a global variable. Then you access g.verbose and do your thing. Instead, according to the singleton pattern I should be accessing some static method of a class to read the value of a variable (which is not going to change). How wasteful is that, not only in terms of program runtime but also developer time, repeating that stupid pattern all over the place?

The fact is that Java or Objective-C are not good languages when it comes to implement global variables, each having downsides, imposing a development penalty on all of us. Global variables won't go away, all but the most trivial programs have or need global state. It is damaging to ourselves when programmers, after having invested time in learning a programming language, throw excuses and tantrums to justify their broken tools. That's an emotional answer, nobody wants to be told that they have wasted their time learning the wrong thing.