Just like the Go programming language had initially a lot of marketing pull due to the fame of the authors and company behind the language, growing in popularity you can hear about Swift, Apple's new programming language for iOS and OSX, which probably makes it the financially most backed up hipster language. It is sort of hipster because nobody outside of iOS and OSX will want to touch it, and Apple has demonstrated to put serious money behind it (hiring Chris Lattner) and will likely continue to do so. Not even Apple wants to keep programming in a crap language like Objective-C forever. And Google, I'm still waiting for you to ditch the abomination known as Java. Please (crosses fingers).

Swift source code looks seriously close to Nim, just like its feature set. Most notably the syntax keeps braces for those still clinging to them, and retains Objective-C's named parameter madness for interoperability. But other than that it is remarkable how sometimes I actually forget I'm reading Swift code and think "oh, that Nim code is weird, how can it compile?". One of the things I noticed after reading some tutorials was that Swift provides an interesting string interpolation feature:

The equivalent code in Nim could be:

It is not that much different but it certainly reduces some sigil clutter. I think the syntax to embed a single variable is awkward because you need to add the closing parenthesis, but then, just like Python mantra goes, explicit is better than implicit. Maybe.

Nim has one serious advantage over Swift, it has macros. The question is, can we steal Swift's string static interpolation feature ourselves? Of course, it's actually fairly easy. Just like when I stole Objective-C properties and later made them really sexy, we will again stomp on the dead bodies of our enemies. Ra ra ra!

As for any other macro we want to write in Nim, it is best to first figure out what AST is Nim producing for perfectly valid code, then try to generate it as closely as possible. We want to create a compilation time proc which will replace a single string literal into a series of concatenations which can be coalesced by the compiler not wasting a single CPU cycle at runtime. Let's dump the AST of the previous Nim snippet:

If we compile this we will get this output:

Fairly easy, when the $ operator is applied, we only need to wrap the identifier inside a Prefix node. For the concatenations we have a recursive tree of Infix nodes. The multiplication expression is wrapped inside a Par node.

Now the only thing left for us is to parse the string literal and figure out which parts are text and which parts are variables or expressions. We can't use Swift's escape parenthesis notation because we are not modifying Nim's string literals, they come with the language. What else can we do? In Nim there is runtime string interpolation using strutils.%() operator. The strutils module uses internally the parseutils module, and luckily we can use directly the interpolatedFragments() iterator for our macro. Isn't it nice when most of the code we have to write is already provided? 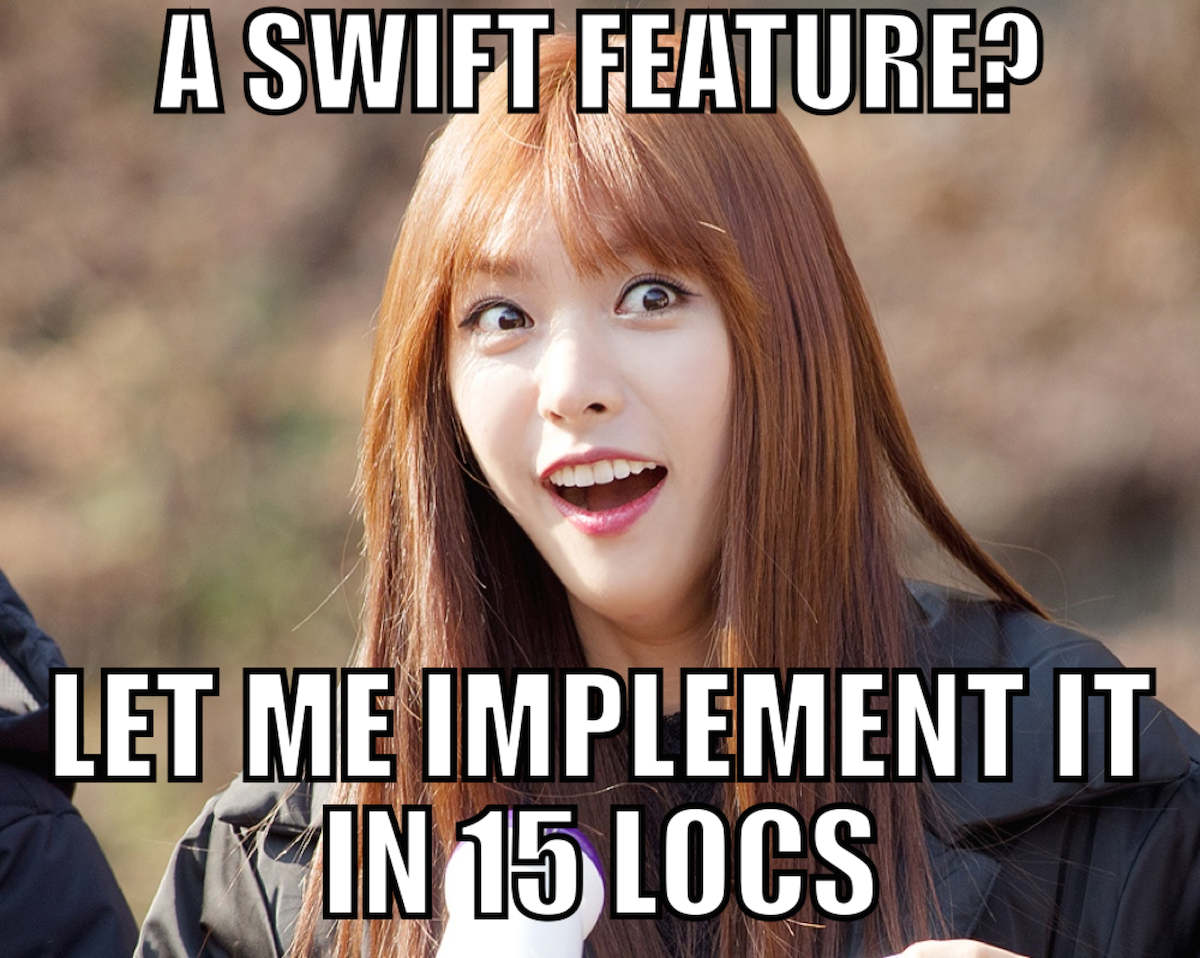 I did warn you, here are the complete 20 lines of code to implement this feature and test it too:

Just like db_sqlite's raw string literal modifier we have implemented here the i macro and use it to prefix the string literals we want to upgrade with string interpolation. Also, since we are within Nim's string parsing rules, the interpolation is done with the $ character which allows both braced and standalone versions, less backslash typing.

The macro is divided in two parts, parsing the string literal and generating the tree of infix/prefix nodes representing string concatenation. For the string parsing we simply add all strings (ikStr) and dollars (ikDollar) as string literals (newLit()). For everything else we simply wrap the expressions inside a call to the $ string conversion operator (just in case) and let parseExpr() do its job.

The result of this conversion is stored as a sequence of PNimrodNode objects, which is a flat list. To convert it into the AST tree Nim expects we use the foldr() template from the sequtils module. foldr accepts as first parameter the sequence of items we want to fold, and as operation we apply the infix() helper from the macros module.

How can be sure this is all working and there is no runtime trickery behind our backs? The most simple way is to check Nim's nimcache directory where it places the C code that later is compiled into a binary. In this case we have the following line:

There you have it, our macro has expanded the string literal into expressions, and since the expression can be calculated at compile time it already appears embedded in the C string literal. No runtime calculation of any type. Success!

Stealing language features with macros is very cool and gratifying. But you need to look at other languages too to see which features they have. Hopefully Swift programmers gain interest in Nim, it would allow them to continue writing proper static code for other platforms like Windows or Linux (unlike the Swift trap) and open their minds to some fresh air. But it is understandable that Swift still has to deal with a lot of old-timers clinging to old practices. Maybe Swift 2.0 will also have macros, they are really neat and allow you to extend whatever language you have with cool features not part of the original spec.